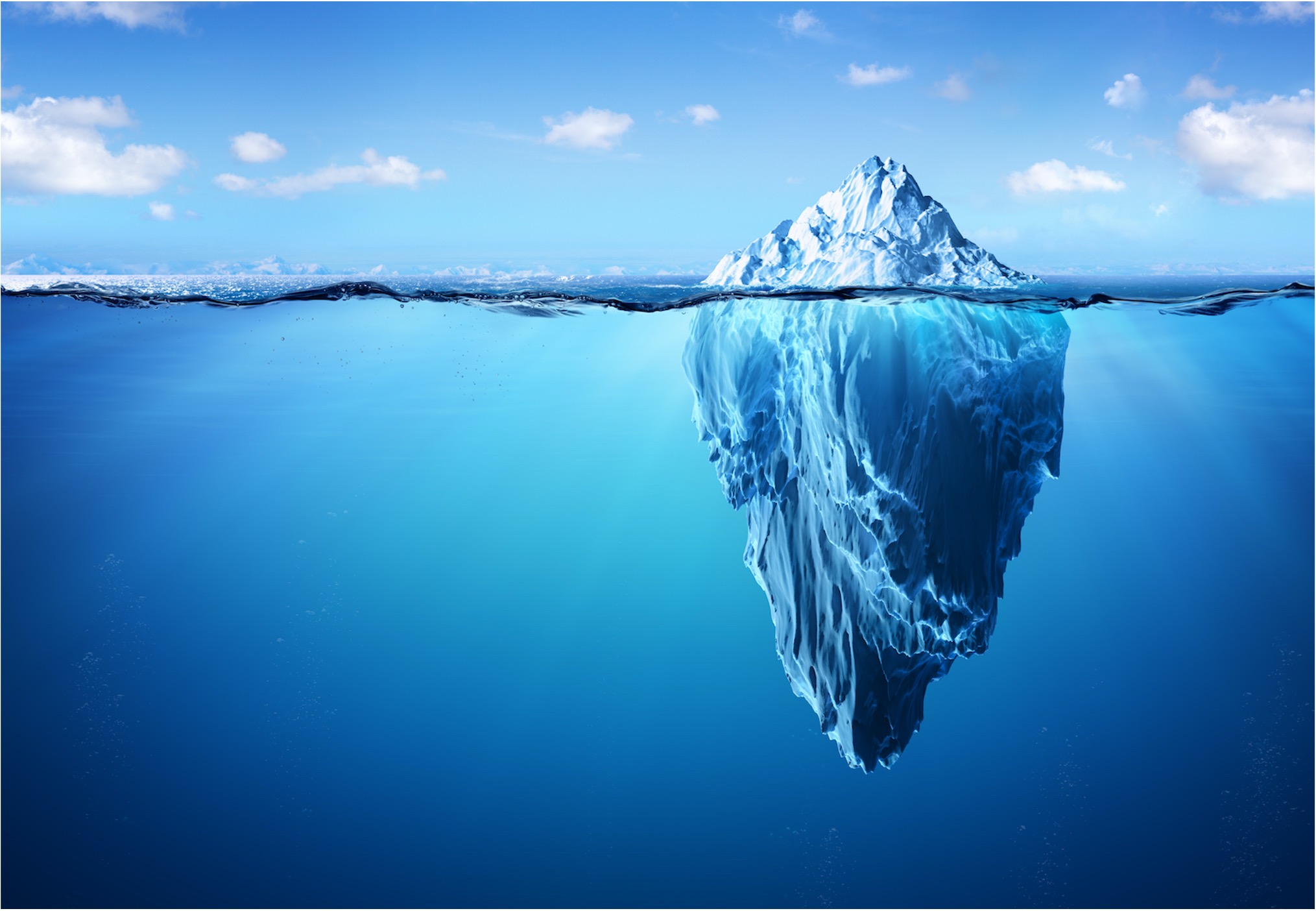 From the tip of the iceberg to the core of the onion, the stuttering community uses metaphors to make sense of a complicated, paradoxical phenomenon. Here we highlight some of our favorites. Check back regularly for new additions - and head over to our Facebook page to share your favorite stuttering metaphors!

Ah, our old friend the stuttering iceberg. Dr. Joseph Sheehan’s metaphor for stuttering dates back to 1970 and is still one of the most common metaphors associated with stuttering today. The mighty iceberg allows us to look beyond the surface of stuttering to what lurks in the waters beneath.

Only a small portion of an iceberg shows above the water. In the stuttering metaphor, this above-the-water portion represents the things that are visible to others: physical movements, the sounds you hear, the way someone behaves while stuttering.

What about the invisible, underwater part? The part that sank the Titanic? That refers to everything you don’t see when someone stutters. It includes all the emotions someone feels about stuttering, whether it’s fear or frustration or embarrassment. It also includes the choices made behind the scenes: choices to change words, to never raise your hand in class, or to avoid looking for a new job in a field that involves a lot of talking.

The stuttering iceberg is different for everyone. One thing is sure, though: stuttering treatment that does not address the under-the-surface aspects of stuttering is missing 90% of the problem.

Imagine walking a straight line on the ground. Easy as pie! Put one foot in front of the other and this task is something most adults can do without a second thought. It’s considered so easy to do while sober that some law enforcement officials use it as a field sobriety test.

Now raise that straight line four feet off the ground. Suddenly the stakes are higher. A mistake means falling. And suddenly that natural, easy walking motion starts to wobble. What was simple to do on the ground is now tense, uncertain - and much more likely to go wrong.

The balance beam metaphor helps us understand why stuttering can vary so much from situation to situation. Complex motor patterns, such as speech or walking, benefit from habit: we know the patterns so well that we can execute them flawlessly. But when they are forced into consciousness, they are no longer automatic, leading to fluency disturbances and other speech errors.

At AIS we’ve found the finger trap to be a powerful tool for explaining the stuttering block to someone who has never experienced it. Sometimes students give classroom presentations about stuttering, and bring these inexpensive toys as a way to help their classmates understand. And all of our therapists have at least one finger trap in their offices!

Or a goose. Or a duck. Or any bird that glides calmly across the surface of the water while its feet are paddling frantically beneath.

Not everyone who stutters will identify with this metaphor. It is specific to covert stuttering - trying to “pass” as fluent by going to great lengths to hide disfluencies. People who stutter covertly may change words, avoid situations, or stop talking - all in the interest of maintaining the illusion that they speak fluently. Like the swan, they can appear serene on the surface, and we never see all the work they are doing to make that happen.

Covert stuttering may be less obvious to listeners, but that doesn’t make it less of a struggle for those who experience it.

Before you even set foot inside, you know what’s going to happen. The killer clown. The maniac with the chainsaw.  The ghoul leaping out from the shadows. The irony of the haunted house is that its torments are actually pretty predictable—and yet it is precisely this predictability, the foreknowledge of danger, that cranks up the dread as you turn every corner. That’s the thing about anticipation: Knowing that something terrible is about to happen doesn’t help. It actually just coils the spring tighter, guaranteeing a big physical freak-out when the next jump scare hits. (Or when a leaf harmlessly brushes your elbow.)

At AIS, we recognize how huge a factor anticipation is in the physical experience of stuttering. When our clients first come to us, they’re often navigating conversations the way they navigate a haunted house: physically tense, primed for threat. Not strolling through with relaxed posture, using their “walking tools,” but clenched and defensive. So when they hit that first stutter, whether it’s a huge block or just a blip…boom, it’s fight-or-flight.

So what would you do to reduce your startle response?

Maybe you’d go on a “scared-y cat tour,” have a guide walk you through all the rooms with the lights on. Maybe you could meet the actors, see them without their make-up and costumes. Or maybe you’d just go through the same haunted house every day for a week, exposing yourself to the scares until they became normal, boring.

At AIS we do something similar, employing systematic and compassionate desensitization to make those stuttering moments less reactive.

If you’ve ever been whitewater rafting, you may have heard your guide tell you not to fight the current if you fall out. You won’t win against the current! Instead, float along with it until you reach a calmer stretch of water. (Please go here for actual whitewater safety tips, do not rely on this speech pathology blog.)

Riding the raft downriver is like talking, and stuttering is that moment where you fall out of the raft. If you struggle against the current, you get bumped around even more, and end up exhausted. But if you go with the current - allowing the stutter to bump naturally through the turbulence - you will save energy, get where you’re going, and soon find yourself in smooth waters again.

Thanks to Atlanta NSA Chapter leader Derek Mitchell for bringing this great metaphor to our attention!

This is kind of a sad one y’all. The elephant we’re imagining is an old circus elephant. When she was a baby, she was chained to a stake in the ground. Every time she tried to take a little elephant walk, she got yanked back by the chain. Soon the elephant got big enough that she could break free from the stake if she wanted to, but she doesn’t know that because she learned early not to bother trying. Even if we took the stake away, she wouldn’t realize she could leave.

This metaphor applies to so many aspects of stuttering I’m not even going to try to explain it. Instead, I’m going to ask our wonderful Facebook and Instagram communities to comment. How does this metaphor relate to your stuttering? What imaginary stake have you been tied to? How did you finally realize you don’t have to let your stuttering hold you down? And what are you doing now that you’re free to roam?

This one’s a classic. It’s about layers. It’s about peeling layers. And it’s about the possibility that what we view as the bulk of an issue might actually just be a husk, containing several deeper truths nestled inside.

There are so many directions we can take this. Maybe the layers are the habits of avoidance and struggle that have grown around the stutter. Maybe the core is whatever experience planted the belief in the first place that stuttering is bad and must be avoided at all costs. Maybe it’s simply realizing that what’s so unbearable about stuttering isn’t the actual stutter at all but rather all of the weight and consequences that surround it.

Regardless, the onion reminds us that getting to the center isn’t about the destination, really. It’s about the process. It’s about looking inward, unearthing the truth one layer at a time. Even if it stings our eyes a little bit along the way.

It’s the first Metaphor Monday of the new year! This week, stuttering is: the hub, or the spoke, of a wheel. Our founder Catherine Montgomery was especially fond of this metaphor, which came from Dr. Paul Cooke of Michigan State University.

For many people who stutter, especially prior to seeking therapy, it can feel like stuttering is at the center of everything. If life is a wheel, stuttering is the hub - the axis around which all other parts of life turn.

It’s unlikely that stuttering will ever leave the wheel completely. But does it need to be so central? As desensitization proceeds, stuttering might become something you think about sometimes, but not every day. Other interests and activities can take their turns in the spotlight. As Catherine would say, stuttering becomes merely a spoke “on the most magnificent wheel.” It might be connected to other parts, but it’s not the central force driving ev​erything.

As you roll into this new year, is stuttering still the hub of your wheel? What steps will you take to move from hub to spoke?

Every now and then on a ski slope, you encounter a patch of ice. Suddenly you’ve lost control of your movement; you’re holding on and hoping to remain upright. How you react is everything. Your limbs could lock up in panic; you could fall on purpose; or you could lean into the slide and wait to come out the other side.

That patch of ice can represent a moment of stuttering. For people who stutter, every ski slope has them! And that’s the key to the metaphor, which we often use to explain why we practice acceptance-based approaches to stuttering therapy. You don’t want a ski instructor whose whole method is based on teaching you that you must always avoid all patches of ice. It’s not realistic, it requires constant vigilance, and it doesn’t provide the help that you need when you do, inevitably, hit that slippery stretch.

A good ski instructor will teach you how to respond to a patch of ice. You’ll learn not to panic and how to remain present and move forward when things start to feel out of control. You might even come to enjoy the variety the occasional icy patch brings to the ski slope! Most importantly, you’ll be able to enjoy skiing without fear, because you know that when the ice comes, you can handle it.
--
The American Institute for Stuttering is a leading non-profit organization whose primary mission is to provide universally affordable, state-of-the-art speech therapy to people of all ages who stutter, guidance to their families, and much-needed clinical training to speech professionals wishing to gain expertise in stuttering. Offices are located in New York, NY, Atlanta, GA, and Minneapolis, MN, and services are also available online. Our mission extends to advancing public and scholarly understanding of this often misunderstood disorder.