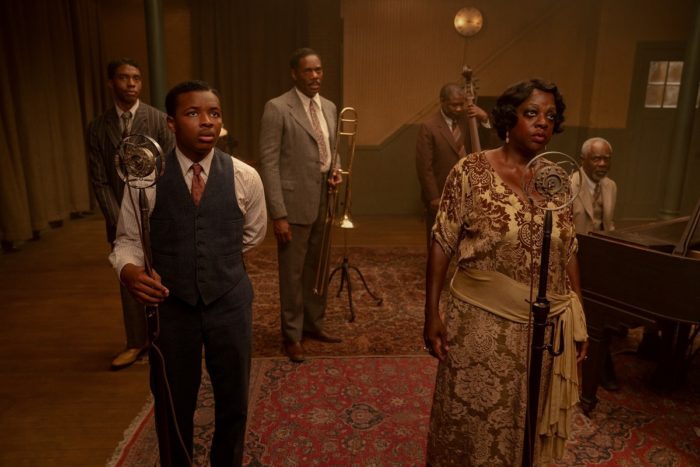 The Oscars are coming up this Sunday, and though the ceremony will certainly look different this year, there are some incredible movies to honor. One of these movies, Ma Rainey’s Black Bottom, is nominated for five Academy Awards. These nominations include best performance by a lead actor, for the late Chadwick Boseman, as well as best performance by a lead actress, for Viola Davis. The performances of both Boseman and Davis are simply stunning and particularly moving to witness, as this was Boseman’s final film before he passed away too soon from colon cancer last August.

Based on a 1982 play of the same name, by August Wilson, Ma Rainey’s Black Bottom is notable for its exploration of the lived experience of Black musicians in the 1920s. Set during a recording session in Chicago, the stories told by the musicians paint a picture of trans-generational trauma inflicted by systemic racism in America.

A Prominent Character Who Stutters

There is certainly a lot to unpack here; however, another intriguing storyline involves Ma Rainey’s nephew, Sylvester. Ma Rainey had promised her sister that she would look out for young Sylvester, who is a person who stutters. Despite objections from her manager and band members, Ma Rainey demands that Sylvester be given the opportunity to record the introduction to her titular song. When her manager argues Sylvester can’t do the part because he stutters, Ma says, “I don’t care if he do. I promised the boy he could do the part, so he gonna do it. And that’s all there is to it. He don’t stutter all the time.”

“I don’t care if he do. I promised the boy he could do the part, so he gonna do it. And that’s all there is to it. He don’t stutter all the time.”

During his first attempt, Sylvester has a few stutters in the form of silent blocks. Ma pats him on the back and says, “That’s real good baby. You take your time. You’ll get it right.” After seven takes, Sylvester delivers the introduction fluently, a look of triumph passing across his face. The narrative here may be perceived as similar to the film The King’s Speech, in that fluency is equated with success. Popular culture often sends this problematic message, that stuttering is something that should be overcome, eliminated.

However, what’s remarkable about this scene in Ma Rainey’s Black Bottom, is Ma’s acceptance of Sylvester’s stuttering, her belief that he should be given an opportunity to speak, to have his voice recorded. Ma carves out time and space for Sylvester to speak, ignoring the objections from her producer about the cost. One can imagine that as a Black woman in the 1920s, and a performing artist, Ma has learned that she must fight for her right to speak, to be heard, to take up space. She deftly passes this lesson along to Sylvester, allowing him to feel joy in his accomplishment.

If you haven’t had a chance to watch this thought-provoking film, it is well worth your time. Interested in more Netflix content related to stuttering? Check out the popular series Bridgerton, in which one of the main characters is significantly impacted by stuttering. It’ll be hard to resist bingeing this incredibly entertaining show.

The American Institute for Stuttering is a leading non-profit organization whose primary mission is to provide universally affordable, state-of-the-art speech therapy to people of all ages who stutter, guidance to their families, and much-needed clinical training to speech professionals wishing to gain expertise in stuttering. Offices are located in New York, NY and Atlanta, GA, and services are also available Online. Our mission extends to advancing public and scholarly understanding of this often misunderstood disorder.