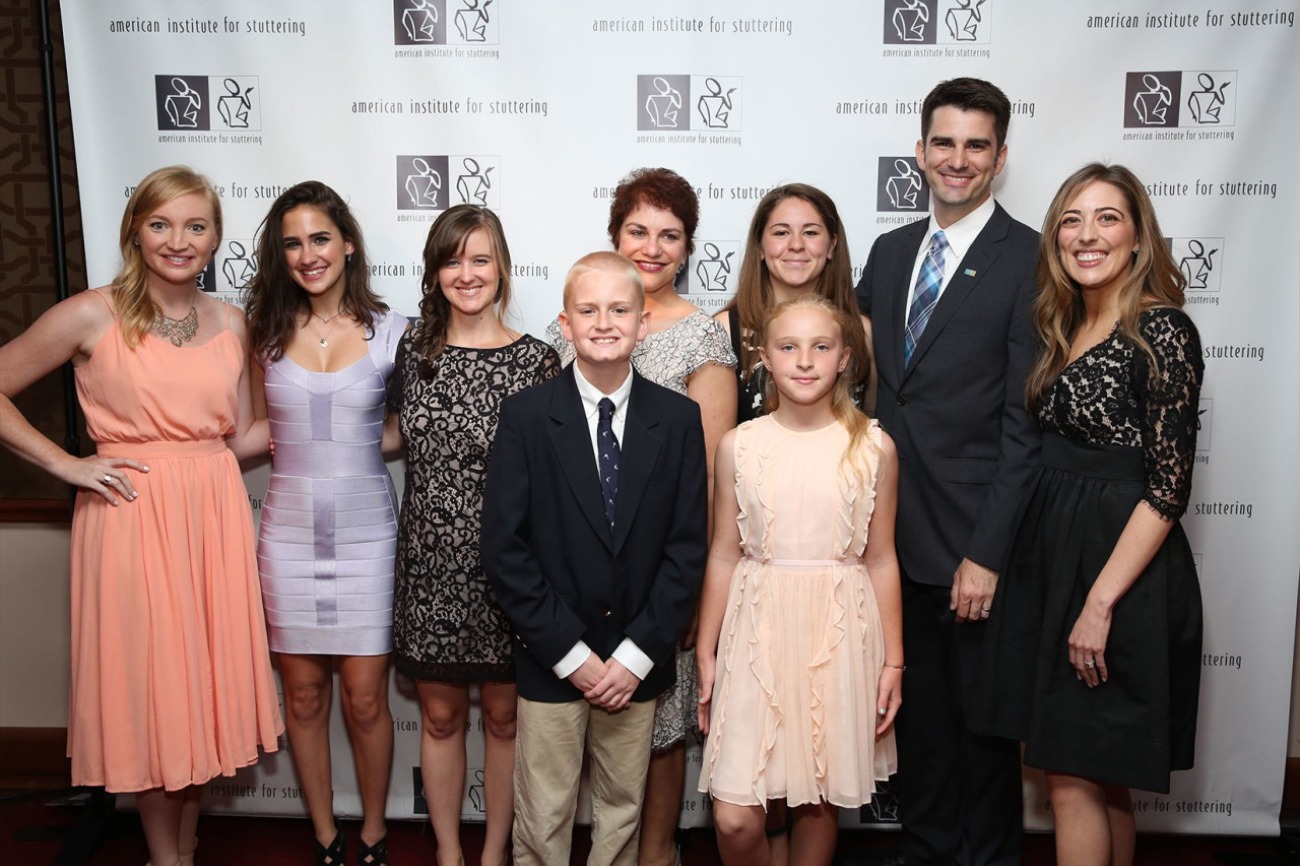 June 8, 2015 – Our 9th annual Freeing Voices, Changing Lives Benefit Gala was held at the Lighthouse at Chelsea Piers. It was wonderful evening of entertainment and inspiration, and even a few surprises.

AIS ambassadors, Danny and Lauren, joined Michael Sheehan in starting off the evening by thanking our corporate sponsors. They introduced Emily Blunt as the mistress of ceremonies.

Gala co-chair Arthur Blank (founder of Home Depot and owner of the Atlanta Falcons) took the stage and talked about how AIS feels like family, and he has personally witnessed the impact AIS has for people who stutter. Jack Welch, former CEO of G.E. was also a co-chair for this year’s gala.

A video message from Vice President Joe Biden was then played for the audience. Mr. Biden reiterated his continued support for AIS, and shared his belief that stuttering does not need to define a person, and encouraged people who stutter to pursue their dreams.

Your 2015 Gala honoree was world-renowned singer/songwriter Ed Sheeran. His award was introduced by Emily Blunt and presented by AIS teens, Julia and Olivia. In his speech, Ed Sheeran encouraged the crowd to embrace their quirks, and emphasized to the children in the audience that stuttering is nothing to worry about and no one in the world can be a better you than you.

The AIS client segment of the evening is often the most touching and memorable part of the gala. This year, three people who have attended therapy at AIS took the stage to share about the help they received here. Our director, Heather Grossman, introduced these speakers and shared a few words about the inspiration that comes from seeing people who stutter turn “I can’t” into “I can” and “I will.” See the video of Heather’s AIS Gala speech.

Jack, age 11, talked about how he loves basketball and baseball, “and oh yeah, I’m also a kid who stutters.” He pointed out that he’s one of the most talkative kids in his class and is very open with his friends about stuttering, and he doesn’t ever let stuttering hold him back. He thanked his AIS speech therapist, Sara, and shared that he thinks its cool that she stutters too. See the video of Jack’s AIS Gala speech.

Our second client speaker, Rahima Dosani, shared that she used to avoid her stuttering whenever possible and was too ashamed to discuss it with her family or friends. She talked about how AIS helped her embrace herself exactly how she is, and chip away at the feelings of shame and worthlessness associated with her stuttering. She added that the experience enabled her to compete in, and win, a slam poetry competition. Rahima then shared her winning poem titled, “Did you forget your name?”. See the video of Rahima Dosani’s AIS Gala speech.

Our last client to speak was Molly, age 10. She shared that she used to be scared to talk in front of her class, but since starting at AIS, it has been much easier. She even gave a speech and handed out flyers on national stuttering awareness day, and “that took guts!” See the video of Molly’s AIS Gala speech.

At our auction, a surprise item was offered up this year: a C. F. Martin & Co. Ed Sheeran X Signature Edition guitar, signed by Ed Sheeran.

Nolan Russo, chairman of the AIS Board of Directors, followed up the auction with a brief speech. He congratulated Ed Sheeran on receiving AIS’s award, and offered a message of gratitude to the tremendous ongoing support of Michael and Ricky Sheehan, and continuous efforts of Heather Grossman and the AIS Staff. See the video of Nolan Russo introducing Ed Sheeran.

To end the evening, Ed Sheeran brought down the house with his hit song, “Thinking Out Loud” (video). Shortly after leaving the stage, chants of, “one more song!” brought him back for more. He finished the night off with his mash up, “Don’t/No Diggity” and a traditional Irish pub song, “The Parting Glass”(video).

ALL the monies raised from advertisements go directly to implement AIS services as an “angel” donor underwrites all the printing.
Order an AdDownload Sample Ads
Press Mentions
Check our Press Coverage page.
Speak freely. Live fearlessly.
Get Started Today
Interested in learning more about AIS and our services? We would love to hear from you.
Get Started