I think my child is stuttering - what should I do? 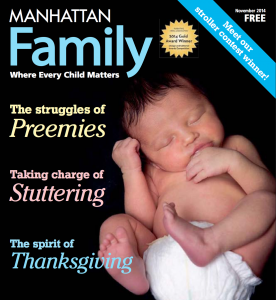 By: Dr. Heather Grossman, Director, American Institute for StutteringOriginally printed in NY Parenting MagazineParents who are concerned that their child may be stuttering often first seek guidance from their pediatrician. Doctors commonly tell parents the child will outgrow the problem and to give the issue no concern. This is true in many cases; we do know that approximately 75 percent of children who show early signs of stuttering will show spontaneous recovery. However, certain risk factors — including family history of stuttering, the child having a sensitive temperament, and other weaknesses in the child’s articulation or language skills — increase the likelihood that the child will continue to stutter. In addition, boys are three to four times more likely to continue to stutter than girls.

Is stuttering a typical part of childhood development?

Children typically have normal periods of disfluency as they develop speech and language skills. These fluency breaks may include saying fillers such as “um, um,” or repeating words or phrases as in “Mommy, can I go- can I g- can I go outside?”Research indicates however that approximately five to eight percent of young school-aged children show signs of true stuttering, and that 20 to 25 percent of these children will continue to stutter into adulthood. Average age of onset of stuttering is just under 3 years of age, corresponding to a period of rapid growth in speech and language skills. Unlike normal disfluency, a young child who is stuttering tends to stretch or prolong sounds as in “Rrrrrrrrun,” produce repetitions of parts of words as in “W-w-w-want,” and may have speech “blocks,” where he is trying to say a word but no sound is heard. Children who are showing typical disfluency show no sign of tension or self-awareness, but young children who are stuttering are more likely to show tension in their voice or face, or have secondary reactions such as looking away or avoiding talking in certain situations.Children with other speech, language, or developmental difficulties have a greater likelihood of co-occurring difficulties with speech fluency. For many children, speech fluency is also more vulnerable under periods of emotional distress, great excitement, and greater linguistic or intellectual demand.Left untreated, children who stutter commonly develop tense struggle behaviors when talking, negative feelings related to confidence and self-esteem, and come to avoid people, situations, and specific words for fear of stuttering. Children who stutter are often subjected to teasing by classmates, further contributing to negative self-concept. So it is important for parents who are worried about their child’s speech fluency to find out whether the problem is actually stuttering.

Why do some children stutter?

The cause of stuttering remains a subject of debate, but research has confirmed that some children appear “predisposed” to stutter due to genetic factors. Other factors (genetic, environment, etc.) are thought to then serve as “triggers” for the stuttering. Stuttering may appear to develop rather suddenly, but for most children the onset is gradual. Adding to the puzzling nature of stuttering is its unpredictability. It may seem to be severe one day, then seem to disappear just as suddenly, only to reappear in full force. We know that parents are not the cause of stuttering, but luckily, there is much they can do to help their child.Children with delays in other areas of speech and language development or who have other developmental difficulties, such as Attention Deficit-Hyperactivity Disorder or autistic spectrum disorder, show a greater likelihood of concomitant stuttering.

Do I need to have my child’s speech evaluated?

Because so many children do eventually grow out of speech difficulties, pediatricians often underestimate the need for professional intervention for children who stutter. A speech-language evaluation should be completed for any child showing signs of physical struggle or frustration when trying to speak. Parents should be aware of certain behaviors that suggest the child is reacting negatively to her speech, such as the child starting to act shy, looking away while speaking, speaking using only a few words, or avoiding certain words or situations altogether. She may begin to exhibit secondary characteristics, such as pressing the lips together or have excessive tension in the voice, that indicates the child is trying to force out words. Teachers may notice that the child’s verbal participation in class is reduced.It is suggested that parents seek help if they notice the problem persisting for three to six months, but it is never too late to receive help. Since not all speech therapists receive thorough training in stuttering, it is recommended that parents work with a licensed speech-language pathologist who specializes in stuttering treatment.

What does an evaluation entail?

The therapist will assess the child’s language abilities, articulation, and fluency using both formal and informal measures, and will gather information about the parents’ observations and concerns. In addition to determining if there is a need for professional intervention for the child’s speech, during the evaluation parents are provided with vital information regarding pediatric stuttering and what actions they can take immediately to help their child. Parents are commonly given suggestions to implement at home that include modeling slower, simpler speech, and reducing overall language demand and time pressure. Rather than tell the child to “slow down” and “take a breath,” parents are taught to be better listeners, and to speak openly and objectively about stuttering without calling negative attention to the disfluencies.

A course of speech therapy will be recommended for children showing signs of true stuttering. Therapy techniques in current practice show excellent results, especially when children are seen soon after the onset of the problem. Depending on the child’s age, the therapist customizes a program that promotes confidence while communicating, and provides an outlet for the child to explore her feelings about speech. The child will also practice ways of talking to reduce stuttering tension and struggle. A good therapist will also provide support for the family and will suggest helpful strategies for the family, such as maintaining good eye contact and encouraging all family members to have their turn at speaking, without interruption.For children with concomitant speech-language or developmental issues, it is helpful to address their stuttering along with their other goals to prevent negative stuttering behaviors and reactions from becoming a more severe and habitual pattern.

You (and your child) are not alone

Almost universal to parents of children who stutter are feelings of helplessness, fear, and isolation. But in the past decade, there’s been a meteoric rise in the strength of nationwide support groups and self-help organizations for children and adults who stutter, and their families. A tremendous amount of information is online, but nothing combats feelings of helplessness like the realization that there are many children and their families who are managing stuttering. And nothing’s better than for children to meet other kids who stutter and for their parents to get together and swap information and strategies.

Tips for parents of children who stutter:

• Practice active, patient listening skills, focusing on what the child says rather than how fluently he says it.• Do not suggest that the child “slow down,” “think before speaking,” or “take a breath.”• Model good communication — this includes having normal eye contact when talking, taking turns, and speaking slowly enough and loudly enough to be heard clearly.• Remind the child that talking can be very difficult, and that it is OK to stutter. Let him know you are there to be supportive.• Educate teachers, babysitters, and other caregivers about stuttering and how the child who is stuttering should be treated.• Work on confidence, and keep them talking!Dr. Heather Grossman is a specialist in stuttering treatment for children and adults, and is the director of the American Institute for Stuttering in New York City. She is regularly called upon for journalistic coverage regarding stuttering, and has been featured on numerous radio and television broadcasts, including “Good Day New York” and “Katie.”